The Republic of Tuva is a far-off and mysterious place, separated from the rest of the world by the snowy peaks of the Sayan mountains. In order to get there, travelers must traverse winding roads over mountain-passes with breathtaking views.

Tuva, as one of the youngest republics of Russia, is located in the very center of the continent between the southern portion of Eastern Siberia and the northwestern part of Mongolia. Tuva is surrounded on all sides by mountain ranges – the Eastern and Western Sayan, Sangilen, Tangdy-Uula, Tsagan-Shibetu, and Shapshal ranges. 82% of the republic’s territory is occupied by mountains, the highest of which is Möngün-Taiga, which means in Tuvan “Silver Taiga. This mountain inspires the Tuvans and is greatly revered by them. It reaches 3976 meters above sea level, going above 4000 meters when the glaciers are at full height. Many brave climbers have attempted its summit, however, the locals say that Möngün-Taiga only allows the approach of those whose intentions are as pure as the snow on its peak.

Other than this, almost half of the territory of Tuva is covered in forests, full of Siberian larch, pine, fir, aspen, and poplar trees as well as bird-cherry, seabuckthorn, willow, and birch. Gathering and processing pine nuts, blueberries, currants, strawberries, lingonberries and others is a traditional seasonal pastime for a large part of the population. That part which is not covered by forests is semi-arid, with broad steppe pastureland, small areas of sand dunes, and tundra. In this way, practically all types of biome can be found in this relatively small territory, including high alpine, taiga, forest-steppe, missing only savanna and jungle. It is in Tuva where bactrian camels and antelopes, steppe-dwellers, exist side-by-side with the tundra-dwellers reindeer and snow leopard. The fauna of Tuva is rich with diversity, including game animals, rare animals such as the snow leopard (Irbis) and mountain sheep (Arkhar), animals which have been placed in the international Red Book of wild animals and protected by the International Union for Conservation of Nature. There are animals found only in Tuva and nowhere else, for instance, the Tuvan beaver found near lake Azas, and many others. Yaks are an exotic animal reminiscent of bison which are raised in the west of Tuva. There are wolves, bears, bobcats, wild boars, cougars, falcons, hawks, black vultures, and many other wild animals.

Tuva’s hydrography is rich with rivers, with almost 15,000 rivers and streams, almost of all of which are part of the Yenisei basin, one of the greatest rivers on earth, which flows through the entirety of Russia from south to north. The Yenisei begins in Tuva thanks to the confluence of the Kaa-khem (Little Yenisei) and Bii-khem (Greater Yenisei) rivers. The Tuvans respectfully name the Yenisei “Ulug-khem” or Great River, mother of all rivers. There is a monument to the geographical center of Asia at the confluence of these two rivers which can be seen in the capital city of Kyzyl. Tuva is called the land of sky-blue rivers and lakes. There are more than 400 rivers, deep exorheic lakes, large glacial lakes, fresh water, salt water, muddy, warm, cold, mountain, and basin lakes, each one of them beautiful. Tuvan maintains the traditional of seasonal rest and treatment ant the medicinal Arzhaan, as these sacred, medicinal springs are known in Tuvan. Practically all types of mineral waters may be found at these springs. 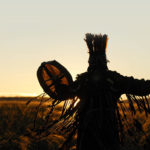 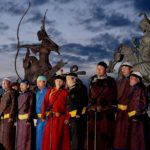 Xoomey in the centre of Asia 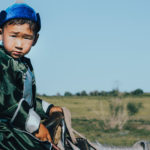